Mr. Smith is in his eighth year as a robotics and engineering teacher at the CCA and in his fourth year as the Armuchee High School girls basketball assistant head coach. Mr. Smith graduated from Shorter College in 1990 with a bachelor's degree in secondary education, received his master's degree in math from Piedmont College in 2002, and earned his specialist degree in administration from Lincoln Memorial University in 2007.

Prior to teaching at the CCA, he taught math at Adairsville Middle and High School for 22 years and has coached track and basketball over the last 30 years. When he isn’t teaching or coaching, Greg enjoys playing golf and watching college football. He is the proud father of two Armuchee High graduates-- Matthew (‘13) and Madison (‘19).

Mr. Smith attributes his lifelong career in education and building relationships with students to investing time in making sure that they understand the material that is taught to them, and that it isn’t just presented on the board.

“It’s nice being in my 30th year of teaching and still enjoying it. I’m excited to see the profound effect the robotics and engineering program has had on the community and students of all ages across FCS. We’ve had graduates go straight into the workforce at high paying jobs, others attend technical colleges, and some even attend Ivy League schools,” said Mr. Smith. “The thing I’m most proud of with this recognition is all the light it shines on those who had a part in creating the robotics and engineering program at the CCA. From dual enrollment and internships to the new program equipment, there have been so many people who helped us get to this point.” 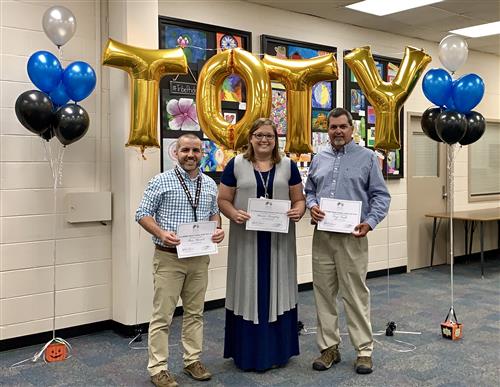 Smith, Rampley, and Burnett were among a list of semifinalists which also included Elisha Lindner of Armuchee Elementary School; Hailey Burns of Armuchee Middle School; and Dr. Joan Davis of Coosa High School.

Each school nominated an individual Teacher of the Year by May 2019. After the field was narrowed down by qualifications for state honors, eligible teachers were interviewed by a panel of community partners who then voted anonymously to select two semifinalists from each grade band. The semifinalists were observed and evaluated in their classrooms by former building administrators to finalize the list of finalists. 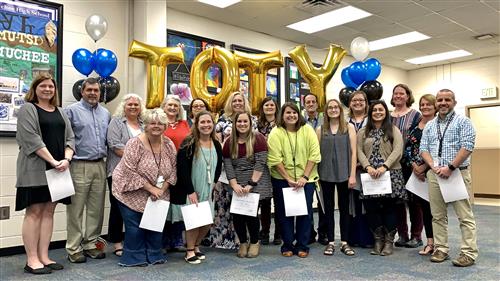 All 18 school-level Teachers of the Year were in attendance at the Floyd County Board of Education’s regular Board meeting for October where they were celebrated with applause, certificates, and gifts bags courtesy of local community partners-- Coosa Valley Credit Union, Floyd Medical Center, Chick-Fil-A, Bobby Lewis LMT, Rome News-Tribune, Jandy’s, and Blackboard. The top three finalists were announced and the winner was surprised with a blast of confetti and a standing ovation from the entire room.