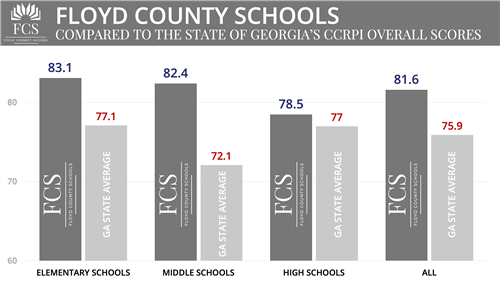 Floyd County Schools (FCS) ranked above the state average on the 2019 CCRPI (College and Career Ready Performance Index) scores released earlier today by the Georgia Department of Education. The CCRPI is Georgia’s statewide accountability measurement as required by the federal Every Student Succeeds Act (ESSA). FCS scores exceeded the state's averages at every level. All public schools in Georgia are assessed utilizing the CCRPI, a comprehensive school improvement, accountability, and communication platform that promotes college and career readiness for students. 2019 and 2018 CCRPI scores are directly comparable. Scores from prior years are not comparable because the state made improvements to the CCRPI calculation as part of its State ESSA Plan. The 2018 CCRPI was the first to use the new calculation.

“We are excited about breaking the 80-point barrier and becoming one of the few systems in the state that have the distinction of being a B district,” said FCS Assistant Superintendent and Chief Academic Officer John Parker. “This is the first time we’ve ever had two schools ranked as an A, and that the overwhelming majority of the schools were ranked as a B or higher. Implementing MAP and a new writing curriculum has helped us to leverage our data and make improvements throughout the year. All the credit goes to our wonderful teachers and students out there doing the work every day.”

The FCS district score for all schools for 2019 is 81.6, 5.7 points above the state score of 75.9. This is the fourth time and third consecutive year FCS has exceeded the state score since CCRPI began in 2013.

“I am so proud of our students, teachers, administrators, and staff for this fantastic accomplishment,” said FCS Superintendent Dr. Jeff Wilson. “Our goal of becoming one of the top 20 school systems in the state is quickly becoming a reality. I want to thank our school board for their continued support of our teachers and students.”

More information on CCRPI and scores for all school districts in Georgia can be found on the Georgia Department of Education website here. The Family’s Guide to CCRPI can be viewed HERE.