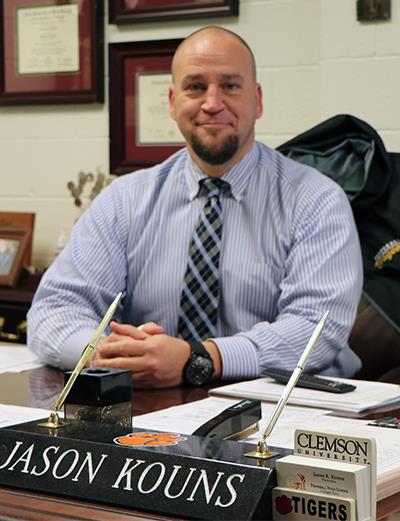 Principal of Pepperell High School
Mr. Kouns began his career as an Elementary School Teacher in Clayton County, Georgia, where he taught 5th Grade for seven years. After leaving the classroom, Mr. Kouns moved into administration as an Assistant Principal at Union Grove Middle School in McDonough, Georgia. Mr. Kouns’ first appointment as a Principal was at Dutchtown Middle School in Hampton, Georgia. Mr. Kouns and his family moved to Gilmer County, Georgia, in 2007, where he served as a Middle School Principal at Gilmer Middle and Clear Creek Middle during the district restructuring process. From 2013-2015, Mr. Kouns was appointed District Superintendent for the Gilmer County Charter School District.
In 2015, Mr. Kouns was named the Principal of Elbert County Comprehensive High School in Elberton, Georgia, and he served in that role for six years.
Mr. Kouns is married to Mrs. Kristy Galloway Kouns, and they have three children, Eli (22), Cole (20), and Mazie (18). His family also includes a dog named Cooper!

Assistant Principal of Instruction at Pepperell High School
She taught five years at Buford High School and sixteen years here at Pepperell High.  After graduating from the University of Georgia, Mrs. Goggans completed her Master's there in 2003 and her Ed.S. at Lincoln Memorial University in 2008.  She was chosen as STAR Teacher in 2013 and 2017 and was a county finalist for Teacher of the Year in 2013.  However, she is most proud of being selected as the Teacher with the Most School Spirit!  Mrs. Goggans is married to Gabe Goggans, a PHS Class of 1992 alumnus and member of the 1990 Pepperell State Championship Football Team.  They have two sons: Preston, a 2021 PHS Graduate, and Eliot, a Junior, both of who participate in football, basketball, soccer, track, and honor classes.  It is ALWAYS great to be a Pepperell Dragon!

Assistant Principal of Discipline at Pepperell High School
David Allen received his Undergraduate Degree and his Masters Degree at the University of Georgia in Secondary Science Education, Educational Specialist Degree in Curriculum and Instruction at Georgia College and State University, and his Leadership Add-On from Georgia State University.  He has taught at Eastside High School in Covington, Georgia for nine years, serving as Science Department Chair last year and leading various administrative responsibilities.  Mr. Allen was voted Science Department Teacher of the Year for Eastside High School in 2016-2017. 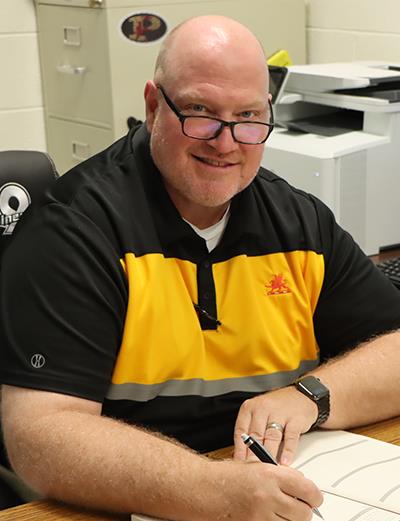 Assistant Principal for the 8th Grade Academy at Pepperell High School
Mr. Topher Byrnes started his career at LaGrange Academy in Troup County in 1993, teaching Social Studies at various grade levels. After several years, he moved into administration at St. Francis High School in Atlanta as the Dean of Students and later as the High School Coordinator (Principal). It was at this point in his career that he moved into public education, teaching Social Studies at Troup High School in Troup County. The following year, he moved back into administration, serving as the Assistant Principal at LaGrange High School and later Gardner Newman Middle School in Troup County.
In 2012, Mr. Byrnes accepted a position as the Principal of Haralson County High School, where he remained for four years before moving to Trion Elementary as an Elementary Principal. In 2017, Mr. Byrnes retired from education. It was in 2021 that he came out of retirement to teach Govt/Economics at Armuchee High School at 49%.
Mr. Byrnes is married to Leah Byrnes (ELA teacher at Armuchee) and has five grown children, two sons-in-law, one soon-to-be-son-in-law, three grandchildren, and one spoiled Yorkie, Riley.